The existence of God proven?

The Barnet Eye has published a blog entitled Blasphemy Special – the right to free speech. It links to a Tweet published by renowned atheist Richard Dawkins.

Help. I'm about to be jailed for making derogatory comments about the Flying Spaghetti Monster http://t.co/1Y2GpWJoov
— Richard Dawkins (@RichardDawkins) September 9, 2013


This, in turn, links to an article on the Bangladeshi Daily Star website which reports that four bloggers are facing long jail sentences in Dhaka for making allegedly blasphemous remarks. The article includes the following sentence, referring to one of the defendants:

“Asif was arrested on April 3 at an Uttara hospital where he had been undergoing treatment for fatal stab injuries he had sustained in an attack on January 14.”

The fact that this man appears to have recovered from fatal injuries surely proves that the believers are right and Dawkins is wrong?

Posted by Canny Linguist at 13:19
Email ThisBlogThis!Share to TwitterShare to FacebookShare to Pinterest

Seen outside a hotel in Bournemouth recently. Click photo to enlarge. 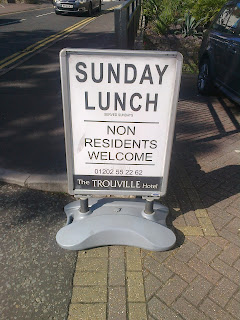 When else would you expect to have Sunday lunch served, if not on Sundays?
Posted by Canny Linguist at 21:37
Email ThisBlogThis!Share to TwitterShare to FacebookShare to Pinterest
Newer Posts Older Posts Home
Subscribe to: Posts (Atom)